I have created a lot of domain controllers and basic domain services. Some for production, most for testing or lab purposes. This was at first while learning how it all worked and later while teaching courses,  testing new techniques and testing things that had nothing to do with the DC but needed to work in a domain.

Last year I started creating scripts so I can set it all up in seconds. Not just installing a domain controller, that isn’t that exiting. But when I have a lab, I want ADobjects, DHCP-leases, DNS-records, that kind of stuff. Creating those with Powershell has been extremely useful and a lot of fun to create.

My colleagues started requesting my scripts for quickly setting up labs, so I decided to clean up what I wrote and publish them for others to use. I’m going to start with AD and DHCP

All scripts and CSV-files are on github: https://github.com/Ba4bes/PowerLab

You can download the scripts and use them right away. Below I will give a bit more information about what it all does and how to use it.

I’ve got a few functions setup for now, I’ll go through them with examples for running them

New-OUstructure -CompanyName "TestCompany" -Verbose
The function sets up a basic OU structure to work with. All OU’s are nested under a base OU with a name of your choice. This one isn’t very flexible, as I have never needed it to be. 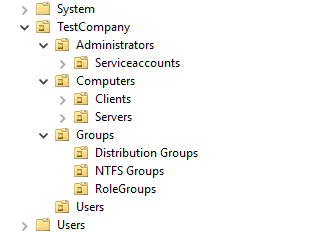 New-Users -CSVPath C:\temp\users.csv -UsersOU "Users" -Password 'Pa$$w0rd' -Verbose
This creates 250 users based on a CSVfile that you will find at the repo. The Users have a few basic properties to work with. For lab purposes, all users share the same password and it never expires. This is because I wanted students to log in as the user in a client VM and different passwords complicated stuff.

So just for the record: